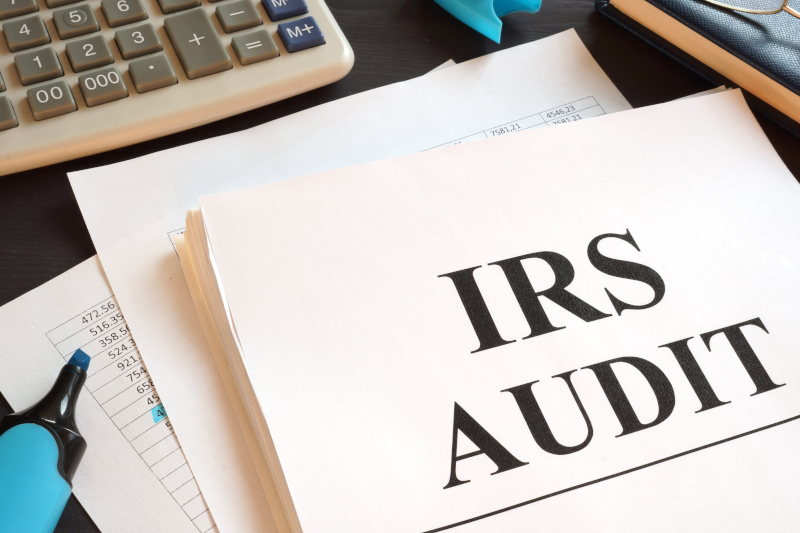 The “red flag” expression comes to us courtesy of its first use in 1602 to signal the preparation for war. An IRS audit, while not a declaration of war against a taxpayer, can certainly put an unprepared client in the cross hairs of an unpleasant tax conflict. Before unfurling the red flags, here’s a quick FAQ - How far back can the IRS audit an individual’s income tax return? Audit periods, referred to as the audit statute of limitations, are generally 3 years, 6 years, or over 107 years.

Accurate records and receipts should be kept until the statute of limitations expires.

Audit Risk Management – Taxpayers in this group should be extremely careful in taking overly aggressive tax positions. Such positions should be discussed with a tax professional in advance and well documented. Bottom line - File the tax return as if it were going to be audited.

Examples of variations include:

As but one example, a taxpayer’s return with income of $100,000 and a charitable itemized deduction of $10,000 (10% of total income) could be flagged by the screening program. The average charitable deduction for taxpayers in that income peer group is only 3% of total income.

Audit Risk Management – Keep complete, clear, and accurate records and receipts. A routine letter from the IRS asking for charitable receipts is highly unlikely to evolve into an audit for taxpayers responding timely with complete documentation.

Yes, this actually happens. Here’s a heads-up for your clients - information forms, such as W2s, K1s, and 1099s, received by your client are also sent to the IRS!2 If your client received compensation, consulting, investment or other income it’s safe to say the IRS knows about it.

Audit Risk Management – As in life, honesty is the best policy when dealing with the IRS. This is especially so since we live in an digitally interconnected financial world. When in doubt, assume the IRS knows everything about your client’s income.

Self-employed taxpayers,3 especially those filing a Schedule C - Business Income and Loss with their return, are frequent audit targets. Of particular interest to the IRS are:

Failure to File a Return - The Treasury Department publicly criticized the IRS2 for lack of diligence in tracking down taxpayers with six figure incomes who did not file an income tax return. As a result, a strategic IRS initiative is underway to address these non-filers. If ever there was a completely avoidable red flag – this is it.

Related Party Audits - If the taxpayer’s business partner or spouse was audited and a large IRS tax assessment was collected, the taxpayer’s audit risk may have just skyrocketed. Although exact data is not available on how much audit risk increases, prudence suggests that the taxpayer consult his or her tax professional for guidance.

Claiming Certain Tax Credits – Past abuse in claiming the American Opportunity Credit and the Earned Income Credit increase the audit risk of taxpayers claiming either credit. The best preparation is claiming only the legitimate credit due and keeping accurate records and receipts.

Cash Deposits and Withdrawals – Deposits of $10,000 or more in cash into financial accounts are reported to the Treasury Department. Even if the deposits do not represent unreported income, a taxpayer should maintain sufficient records to prove the origin and reason for the deposits.

Undeclared Foreign Assets – Foreign governments report a U.S. citizen’s ownership of foreign financial accounts in excess of $10,000 to the U.S. Treasury Department. A U.S. citizen’s failure to report such accounts is a major audit red flag. The best defense is to claim all such foreign assets and any foreign sourced income.

The extra work heaped upon the IRS as a result of the COVID-19 virus is expected to slow, but not stop, the IRS audit process. A wise client will not count on the temporary audit slowdown as license to stretch the tax compliance envelope.

This brief blog raises awareness of just a select few audit red flags. One effective strategy in managing audit risk is to engage a practicing CPA or tax attorney to prepare the return and advise the taxpayer of audit risks. Another approach is using tax preparation software that alerts the user to audit risks as part of the preparation process.

The information presented herein is provided purely for educational purposes and to raise awareness of these issues; it is not meant to provide and should not be used to provide tax, legal, compliance or financial advice. There are variations, alternatives, and exceptions to this material that could not be covered within the scope of this blog.

2 7 Reasons the IRS Will Audit You. 2021, January 20. Retrieved from https://www.nerdwallet.com/article/taxes/reasons-irs-audit

Posted in Good to Know
← Accounting for InflationWho is an Investment Advisor? →