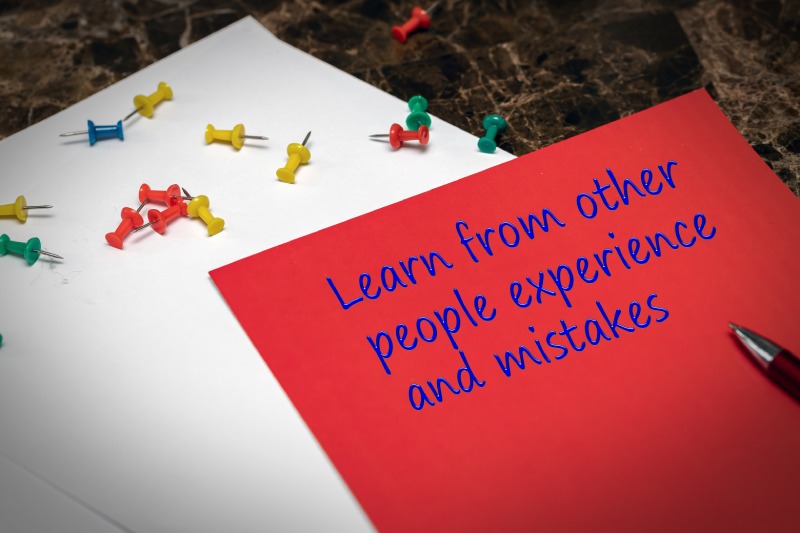 CFP® Certificants in the News

This blog will emphasize recent CFP Board disciplinary trends and the avoidable mistakes made by certificants and candidates1 that can lead to unnecessarily severe discipline. Data for this blog is taken from a CFP Board News Release dated June 30, 2021, in which forty disciplinary actions were published. The topics covered herein should serve as a cautionary tale for current certificants and a study priority for candidates. We will begin with the introduction from the News Release.

But first, let’s establish context. What, exactly, does CFP Board expect from a certificant’s ethical conduct? That answer is spelled out in great detail across the breadth of the Code of Ethics and Standards of Conduct. In addition, violations are subject to discipline—potentially severe discipline—under the Procedural Rules. With this context in mind, now we turn to the introduction taken directly from the News Release.

“Certified Financial Planner Board of Standards, Inc. (CFP Board) announced today [June 30, 2021] public sanctions against 40 current or former CFP® professionals, effective immediately or on the date noted in each case. In order of increasing severity, public sanctions taken by the CFP Board include Public Censures, Suspensions, Temporary Bars, Permanent Bars, and Revocations of the right to use the CFP® marks.

In December 2020, CFP Board announced that it had completed background checks on all CFP® professionals to detect potential misconduct that previously had not been reported to CFP Board [emphasis added]. Misconduct can include regulatory actions, firm terminations, customer complaints, arbitrations, and civil court litigation that involve professional conduct, criminal matters, bankruptcies, civil judgments, and tax liens. From these background checks, CFP Board opened “Historical Investigations” into the conduct of 1,266 CFP® professionals. More than half of the 40 public sanctions announced in this news release resulted from those Historical Investigations.

‘CFP Board continues to hold CFP® professionals accountable if we determine that they violate CFP Board’s Code of Ethics and Standards of Conduct,’ said Thomas Sporkin, Managing Director, Enforcement at CFP Board. ‘Our enforcement process is defined and comprehensive, yet fair to those whose conduct is being evaluated and credible to the public. Our enforcement program is a critical consumer benefit that sets CFP® certification apart from other credentials and designations in the financial services industry.’ ”

Next, we’ll dive into the disciplinary actions and their root causes. 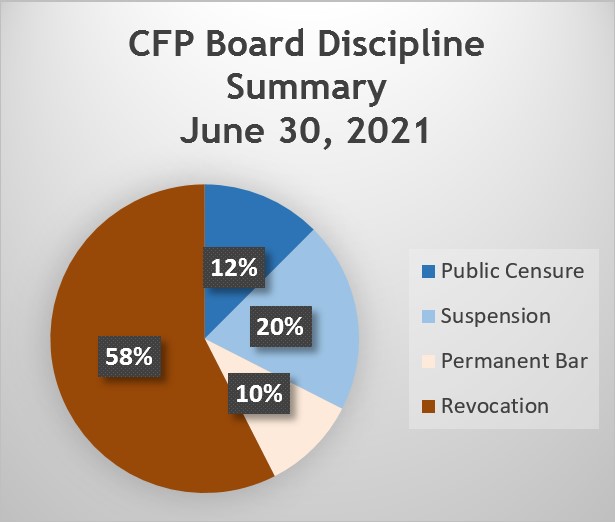 This chart summarizes the disciplinary actions imposed by CFP Board in the News Release.

Shockingly, almost six of every ten disciplinary actions led to the permanent revocation of a certificant’s right to use the CFP® mark. We’ll discuss revocations in just a moment but first, let’s identify the behaviors that led to the discipline summarized in the chart, starting with Public Censure.

CFP Board issued five public censures against current CFP® certificants for reasons such as failure to disclose:

Eight certificants had their right to use the CFP® mark temporarily suspended. A suspension of one year or less generally results in automatic reinstatement. However, reinstatement after longer suspensions is neither automatic nor guaranteed. The maximum suspension period is five years. The cases summarized below are characterized by a violation or suspected violation of the Code of Ethics or Standards of Conduct plus a failure to respond to CFP Board information requests in a timely manner.

Suspensions for one year plus one day were imposed for failure to:

A Five-Year Suspension was levied against one certificant who pled guilty to a morally reprehensible crime.

A candidate can never become a CFP® certificant if permanently barred from certification. The following candidate behaviors were core determinants of this severe discipline, although failure to respond timely to CFP Board requests for information was also a factor:

CFP Board took the permanent step of revoking twenty-three certificants’ right to use the CFP® mark. The revocations frequently involved a certificant’s failure to respond to CFP Board requests for information or failure to cooperate with an investigation plus one of the following:

In the author’s considered opinion, at least one of the revocations could have merited a lesser discipline if the certificant had responded differently. For example, one certificant’s right to use the CFP® mark was permanently revoked for failing to disclose a tax lien and, apparently, failing to make a good-faith effort to repay the taxes due. Contrast that heavy discipline with the relatively light Public Censure assessed against another certificant for failing to disclose a tax lien; in that case, the certificant requested and received an installment payment agreement from the IRS and was current on the installment payments.

Once again, in the author’s opinion, yet another certificant’s discipline was needlessly escalated because the certificant lied to CFP Board staff during the disciplinary process.

Bottom line—Thomas Jefferson was right when he said, “honesty is the first chapter in the book of wisdom.” If President Jefferson were a certificant today, his timely admonition to us might be “disclose honestly, disclose fully, and respond timely.”

The disciplinary cases discussed in this blog may be viewed at  https://www.cfp.net/news/2021/06/cfp-board-imposes-public-sanctions-on-40-individuals.

1 A candidate is an individual who has successfully completed a CFP Board registered Certification Program and may also be referred to as a candidate for certification.

Posted in CFP in the News
← Equitable DistributionsRetirement Funding Calculation →